This is really hard. I’m listening to Seth Godin, the marketing guru give me advice on how to connect with people and develop a free blog that people will actually be interested in, in a time-poor and choice-saturated modern world. Surely with my writing skills, envisioning skills, empathy and imagination I can do this?

But I want to do more than just this. I want to provide a service that helps our relationship with the rest of Nature, that integrates society more closely with Nature and itself, that there are no more lonely people; that the multiplicity of possible connections online actually translate better into meaningful face to face connections, and those all-important oxytocin-releasing hugs. (Anyone got a hug for me? I need one.) Here is a great TED talk on Youtube about the negative feedback loops, biological and neurological, that happen as a result of loneliness: The lethality of loneliness

It seems to me, from what I’ve observed and the reading I’ve done, that the capitalist model of society, as it currently exists in its dominant form, prevents a proper integration of culture that could almost eliminate loneliness.

Possible solutions to these examples of loneliness, briefly (to be expanded on in future posts):

The internet may be the most powerful tool that we’ve ever had, ironically, to reconnect with Nature and with each other face to face. How can I use the internet to translate the multiplicity of possible online connections into actual face to face connections (and hugging!) ? How can we use diverse connections online to reshape the actual, physical society we live in, in a way that all but eradicates loneliness?

Perhaps this blog -Epic Tomorrows- could be a force for good on this mission. Will you help me?

Why am I lonely? I practise gratefulness -gratefulness for everything in my life. So with every aspect of loneliness I discuss, I can reflect on how it’s a whole lot worse for others. That’s not to discredit the nuances of my personal experience.

Although I have a basic safety net of financial support from my family, I struggle to find work. This is partly due to my mental health needs. In general I can’t afford to go out and socialise in the ways that people tend to do. The stress and anxiety of looking for work exacerbate this loneliness.

Yet, I am skilled and versatile. How much worse this kind of loneliness must be for those who have no family, or less skill sets than I have. Capitalist culture isolates and devalues the mentally ill, and the skilled creative person who hasn’t got entrepreneurial savvy.

I live a semi-nomadic lifestyle. This is the way I am and is the only way that makes sense to me in this decrepit modern society. I give society that label from a place of wanting justice for all. For myself, if I wasn’t compassionate for others globally, I could conceive of my life and live it as comparatively one of the most privileged people in history.

As it is I can move around and pick the best bits from the city and the country, and the so-called rich and poor neighbourhoods. Thus I can begin to form within myself a wholeness that I intuit is true and sustainable for me and for the globe as a whole. My intuition is bound to be some way off, but I can hone it, especially as I gain knowledge of what is going on in the world, and what has gone on.

This does not mean I am not loyal to community and place -I am loyal. But I like to travel inbetween the places I am loyal to, and sometimes outside those places.

Capitalist culture does not support the nomadic and the semi-nomadic. It is not easy for me to connect meaningfully, as I move. I am lonely. But how much worse it must be for certain homeless wanderers, and some single people who feel they have to move house every few years in order to get the right kind of paid work.

I am lonely through self-awareness. Through a heightened sense of self-awareness and thus awareness of society, I am forced into loneliness. This includes awareness of the insubstantiality of my ‘self’, of all human identities. Modern society is falsely stratified according to skill sets, with the aim of greater economic productivity for the various nation states. This has resulted in arbitrary ‘personality types’ of, for instance, the so-called ‘sporty’, ‘creative’ and ‘scientific’ types which are actually just facets of one humanity, nurtured to a lesser or greater degree in different people. This isn’t denying the role of genetics -in fact genetics are responsible for perpetuating these arbitrary divisions- but they are not to be set in stone.

It is lonely not to meet people who are aware of this fragmentation of society and self and who are positively addressing it in themselves. But I realise that I need to get out more. But lack of money. See above. And lack of confidence. See below. Yet how blessed I am! How much more lonely must be the person who feels fragmented, or feels like a fragment of the wholeness of what it is to be human, without any awareness or knowledge of why they feel this way!

The nation state makes me lonely. Getting my news from various YouTube channels (including, but rarely, the BBC) it is clear that international politics is 80% about aggressively maintaining national borders / identity, and those borders and identities as extrapolated across the world in trade agreements and branches of corporations. Of course it is lonely to live in this world of competing national warlords. When will we dispense with them? But how much more educationally privileged I am than the nationalist who believes in her nation, and yet in her mistrust of all immigrants, foreigners and non-nationalist natives, is potentially still very lonely.

‘I suffer from social anxiety.’

Being tired rather than energised by human company is supposed to be the sign of an introvert, and yet sometimes recently I have begun to be energised by some forms of company, and by company in general. I have a theory that like ‘personality types’, the ‘introvert-extrovert’ binary is a false construct which has grown in strength due to entrenched interests and oppressive power structures in society, especially in the latest form of society known as globalised capitalist society. In other words, ‘the extrovert’ denotes the person who on the surface has adjusted to capitalist society, and the ‘introvert’ is the person who on the surface, hasn’t. There will be exceptions and subtleties. Isn’t it then, usually the introverts who are the most incisively critical of modern society? This is the beginnings of a theory and needs a closer looking at.

As an ‘introvert’ (although I am purposefully becoming more balanced) and as a ‘shy’ and ‘anxious’ person to whom modern society doesn’t make much sense, I am of course lonely. Despite achieving positions of facilitation and leadership, sometimes the most basic human connections, or conventions of connection, elude me. Nevertheless I am infinitely luckier than the introverted person who believes they were born introverted, and than the socially anxious person who believes in the biomedical model of mental illness to the extent that they will take tablets for years before addressing their own personal growth.

I am polyamorous. I am also sexually liberated. In contrast I live in a society that is monogamous, and both sexually promiscuous, in a negative way, and sexually repressed. Being thus at odds, I am lonely. Especially as there is a very small pool of partners available to me. But I would rather be lonely and free in my expression of love and sex -if only in my head- than deeply connected within the web of hypocrisy of modern intimate relationships.

I understand that aloneness is a rich state to be in, but it is no excuse for the endemic loneliness at the heart of modern culture.

Here I am again, with some more ways in which I am lonely! Ah, but I am grateful. I am really grateful. Every waking moment of mine is full of the luxuries of relatively clean air, relatively unpolluted food, and signs of a biodiverse Nature around me. I am fit and healthy and versatile. What more do I want? Well, I want to ensure that these ‘luxuries’ are standard for everyone, in the likelihood of approaching global upheaval.

I am heavily critical of contemporary society and culture, and so I am lonely. I am deeply aware of how the current global civilisation-mesh -global capitalist civilisation as a whole- cannot last. Just as all previous empires and civilisations have collapsed and evolved, so will this one. What makes you think that capitalism is so special?

Fossil fuels are becoming more scarce and there is not enough time to develop infrastructures based on other fuels, before the disintegration and Descent of the old infrastructures. We are globally ‘way behind time’ in terms of preparedness for the necessary civilisational shift of the coming decades. This is largely due to the stubbornness and fear of the kings of the old systems. This could be a good thing, as civilisation breakdown-breakthrough will finally show us the irrelevance of these kings and their habits-of-highly-ineffective-people.

But I am lonely in my realisation of the transience of capitalism. I attempt to educate others, so that I don’t feel so lonely. I suppose it is the loneliness of the leader that I feel, but I wish to encourage leadership in all of us.

I don’t like to drink much. In that sense I could be lonelier than the average drinker. Maybe I’m just in the wrong country.

I am genderqueer, or I prefer, ‘a gender rebel’. Not to identify with traditional masculine and feminine concepts, puts me at a disadvantage of connection, you could say. A certain loneliness results.

Being a change-maker and an entrepreneur is lonely. I am on a bridge over an abyss. I am afraid of what is on the other side, and I may fall and have to climb my way back up to the wrong side of the chasm -where I started from. Ironically, in order to strive ahead to build strong post-capitalist community, I have to sometimes sacrifice my connection in-the-meantime to the scant community that is already in my life.

I am celibate, but erotically so. This is the result of the disjunction between my liberation and the repression of the society around me. It is especially lonely when in my attitude I am misjudged as ‘easy’ or on the other extreme, ‘prudish’. Nevertheless, celibacy contributes to my rich aloneness which is something separate to my loneliness. Without some of this fertile solitude, I would not be able to write about the isolation that so pains me.

9 thoughts on “Loneliness -Parts One, Two and Three”

My name is Matthew. Click on my arrest to find out more about me. Image by Snowflake Foxtrot (Rest In Power) 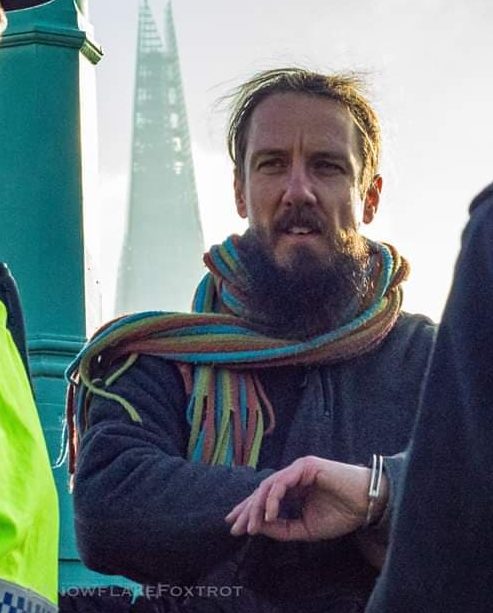 I rely on your generosity to enable me to continue working on the WHWG compendium. The suggested donation is £10. Just think, whether you pay or not, you have free life-time access to WHWG as it expands infinitely across the webniverse and helps create Epic Tomorrows for all of us!! (Steady on Matthew!)